Collier-Lee Honor Flight heads to D.C. after 2-year hiatus due to pandemic  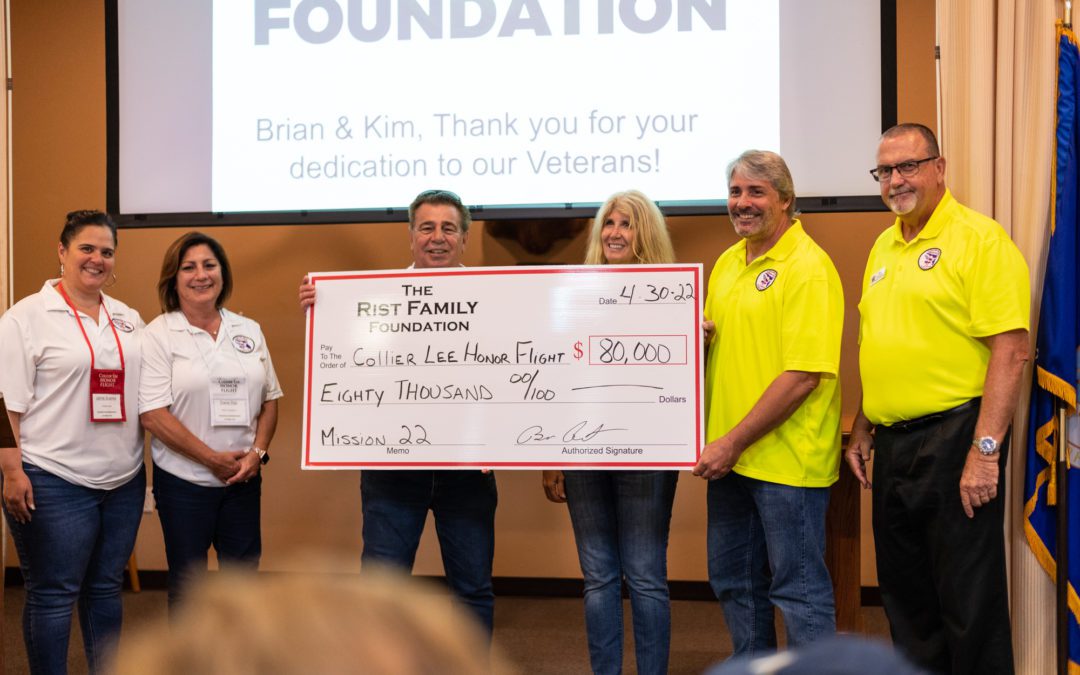 As reported on Wink News

Almost 100 veterans will get a once-in-a-lifetime experience this weekend.

The Collier-Lee Honor Flight is back after the pandemic canceled the event the last two years.

This time, 85 veterans will make an 18-hour trip to Washington D.C. where they will visit the memorials honoring them.

Brian Rist of the Rist Family Foundation donated $80,000 to make it happen.

Only four World War II veterans will be on the flight. The group also includes Korean War vets as well as veterans from Vietnam and the Cold War.

Every one of them wore the nation’s uniforms and was prepared to pay the ultimate price for the nation’s freedom.

“First of all freedom isn’t free so let’s start with that,” Rist said. “All these veterans gave a huge amount of sacrifice so that we can live the life that we live and a lot of them when they came home, they didn’t actually get treated the right way. So now is an opportunity to send them to Washington so they can see the monuments that are really in their honor and really get them to say thank you for all of the things they have done.”

“If only one of these veterans has an experience that really says thank you to them, then I think it’s well worth it,” Rist added.

One woman and 84 men will be participating in the Honor Flight.

“The fact that I am the only woman going. I mean as far as a veteran and just the honor of being selected is beyond comparison. It’s, I’m just ecstatic. I don’t know what else to say,” said Joan C. Farrelly.

Farrelly is 85 years old. She served 23 years in the army during the Cold War era. Her story started in 1956 when three recruiters went to her school. She immediately knew she wanted the army life.

Back then, women did not serve in combat so she supported the men from behind the scenes, first as a clerical worker and then she went on to work in crypto and security.

She eventually worked her way up to platoon leader where she used her position to help other women.

“I was training young ladies that came into the service. Hadn’t been away from home. It was such an honor to be able to teach them the things that I knew like proper way to wear the uniform. The proper way to put on their mask. and give them encouragement that they should be strong enough to stand on their own two feet and perform any task that is put in front of them,” Farrelly said.

Farrelly was stationed at Fort Eustis in Germany twice. And she spent another year at Camp Zama in Japan.

Farrelly can’t think of all of the things she has done but she said she is certain she changed lives.

“I definitely, I think I did, yes. But I know one young lady did a search on me about five years ago, ten years ago, to find if I was still alive and where I was and everything and we have been in touch with each other ever since then,” Farrelly said.

And she certainly knew her hard work paid off.

“In fact, I went into the barracks when they graduated and I sat down on the floor and cried because it was my first platoon and they did a heck of a job. I was just so proud of them,” she said.

Ronald Maclean is also headed to Washington. And it will likely be his last. Doctor’s say Maclean, who has very aggressive leukemia, has less than three months to live.

Regardless, he stays active and continues to serve others.

“I’m senior vice commander of the senior disabled veterans plus I am still riding a motorcycle that’s a trike,” Maclean said. “I have a mobility scooter that fits in the back seat and I’ve gone 37 miles. It goes on airplanes in the overhead compartment and I’ve bought a new trike in January of last year and I’ve already gone 21,000 miles on it.”

McLean said you have to enjoy life.

“You can’t just give up on it,” Maclean said. “No matter how your body feels, it’s silly to lay down and say I’m going to die. It’s just a waste of time. I’m going to enjoy every last minute I can and I will fight till the end.”

One of his dying wishes is to go on an honor flight.

“I met the honor flight people years back. I’ve gone to it when the flight comes in to welcome the veterans back. And I have never been fortunate to see any of the monuments and I had let them know because I have dementia, I wanted to see it before anything happened not knowing when they told me I only had three months to live. But I really want to go see this. It’s a memorial for Vietnam veterans firstly but also we will make memories because when you’re a veteran, you’re a veteran.”

If you would like to welcome the veterans home, you can head to Southwest Florida International Airport on Saturday at 8:30 p.m.