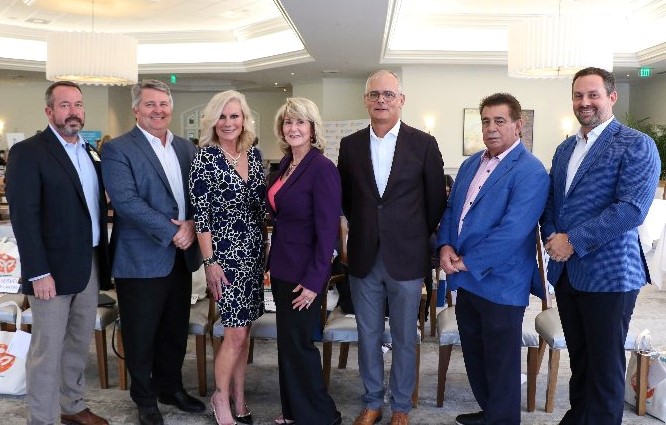 As reported by Gulfshore Business:

Fort Myers, FL (April 19,2022) – A panel of leaders from seven successful firms in Southwest Florida shared their stories and knowledge this week with career-minded high school students during The Immokalee Foundation’s CEO Leadership Summit in Naples.

During the networking opportunity at Grey Oaks Country Club and a panel discussion moderated by WINK News anchor Corey Lazar, the local leaders dispensed both personal and professional advice to juniors and seniors from Immokalee High School. The students are part of The Immokalee Foundation’s educational program that guides them on curriculum and career pathways for business management and entrepreneurship, engineering and construction management, education and human services, and health care.

Education, hard work, determination, passion and giving back to the local community were common themes and traits for success shared Monday during The Immokalee Foundation’s first CEO Leadership Summit.

Michael Wynn, president of Sunshine Ace Hardware and chairman of Naples-based Wynn Family Companies, wanted to dispel the belief that relatives in a family business have it easy. “Unlike what most people think when you’re in a family business you get the cush jobs and everything’s easy. That was not the philosophy of my family,” Wynn said. “In fact, they made you work harder than anybody. I looked at getting another job because they would never give me a raise.”

When he had to enter every item in stock by hand for scanning bar codes years ago, he set a company record for working 105 hours in one week. “It still stands to this day,” he said, noting that those early experiences led to developing a work ethic that helped him overcome obstacles later. “It’s just been an incredible opportunity and journey but without that hard work, without that education, it never would have been possible,” he said.

Wynn also stressed the family values of being humble and doing the right thing. “Be willing to listen to other ideas. Be willing to take your idea and put it second because somebody has a better one. It means putting people first, investing in relationships and not being so self-focused,” he said. “It’s amazing how just that one characteristic can thread its way through so many different things and build relationships and give you an incredible reputation.”

Gail Markham, founder of the local accounting firm Markham Norton Mosteller Wright & Co, P.A., was motivated to overcome the early challenges of starting poor with a home life that included a father who was an alcohol abuser. The Florida native was determined to have a very different life than that of her mother, who became a single mother of four without a job, education or work experience, surviving on $55 per week. “I don’t want to live like that. You don’t want to live like that,” Markham said. “So, I was very determined that I was going to have a different life than my mother did. My mother was a survivor and she provided for us but it was really tough for her.”

Seeking a different path in life, Markham asked her school guidance counselors for help to get to college, which led to a full-ride scholarship to the University of Florida. She eventually transferred to the University of Maryland, where she earned a degree in business management and ended up in Fort Myers, where she got her first job after college.

“The reason I’m telling you all this is because you can do that also,” Markham said. “I was just talking to a young lady and she said ‘How can I go to college?’ There are many opportunities in Southwest Florida to go to college. What you need to do is get pointed in the right direction.”

Markham mentioned scholarships available at Florida Gulf Coast University and plenty of opportunities at local community foundations. “I have to tell you, education is the ticket. That’s what got me out of the life which I grew up in and into the life I have now, which is a very good one.”

After paying her dues and gaining some CPA experience, Markham started her own firm more than 40 years ago. “We are now the largest independently owned firm in Southwest Florida and we have offices in Fort Myers and Naples, and there’s about 50 of us,” she said. “And, I’ve been having a blast.”

Known as a visionary and a team-builder, Markham’s specialty is forensic CPA. “I am involved in all the financial parts of litigation,” she said. “And what are people looking for? They’re looking for the money and I’m the money person. I testify in court. I do mediations. I do all kinds of cool things. It’s been a fabulous career for me.”

A Category 5 hurricane was a life-changing event for Brian Rist, founder of The Smart Companies, which includes Storm Smart, Florida’s largest manufacturer and installer of hurricane protection products. Rist was living on the east coast of Florida when Hurricane Andrew made landfall in August 1992. “It changed everything. It changed my life,” he said. “We spent about 18 months in Dade County after Hurricane Andrew trying to help them rebuild and learn why things happened the way they did. I walked away at the end thinking there just had to be a better way.”

After lengthy trials, Rist and his partners created new hurricane protection products and started Storm Smart. “In the beginning, it was just really three of us. We just kept working hard and surrounding ourselves with better and better people,” said Rist, noting that the company grew to more than 100 employees before Hurricane Charley struck the west coast in 2004 and his business grew again.

“The business grew so much that we were picked by Inc. magazine five different times as one of the fastest-growing privately held companies in the United States,” Rist said. “And I learned the trick was, and I started this really early, is that I always surrounded myself with people who were a lot smarter than I was.”

David Corban, president of David Corban Architects PLLC in Naples, told the students to continue seeking out educational opportunities. “Some of the things that kind of direct me and kind of sent me always to the next step is to never stop learning and to always be curious,” Corban said. “I think those are things that are very important. I think if you’re doing those things, and of course working hard, I think that’s important to a fulfilled life and not just a career.”

After graduating high school, Corban took a two-month architectural tour of Europe that ended up being integral in shaping his career. “That really informed my practice and how I think about architecture,” he said. “I also met my wife there, too, so that was pretty amazing.”

Ryan Carter is president of Scotlynn USA Division, a logistics company based in Fort Myers that routes freight throughout the nation. Scotlynn has grown from four employees to more than 300 employees in just 12 years with an average increase in sales of 40% or more annually.

The route to get to where the company is today has been a long journey that started off simple and became more complicated over time, Carter said. “This year, we’ll ship over 430 billion pounds of food in the United States and we’re tracking close to a billion dollars in sales for this year,” he said. “So, we’ve come a long way through hard work, the dedication of our team and just doing what’s right for our clients and each other.”

Sandra Stilwell Younguist, CEO of Stilwell Enterprises and Restaurant Group, owns six restaurants, inns, a marina and shopping centers in Lee County. Younguist relayed her beneficial experience of a personal mentor who helped guide her and her businesses. She advised students to always tell the truth and to not be afraid to admit that they have made a mistake.

Stilwell Younguist took a financial risk during the pandemic by keeping her staff busy doing painting and renovations at her businesses even though her restaurants weren’t serving customers. That goodwill paid off because she didn’t experience the staff shortages that have troubled many other businesses, she said.

Scott Lowe, who grew up in Naples and graduated from Barron Collier High School, earned a dual master’s degree at the University of Virginia and returned to his hometown, where he now is market CEO of Physicians Regional Healthcare System. Thirty years ago, Naples was a vastly different town that didn’t have the professional development opportunities it has today, Lowe said, encouraging students to continue seeking out career development opportunities.

“I’ve had a lot of bosses in the past, some good, some bad, but I’ve learned from every one of them. I’ve certainly had a lot of employees and I’ve learned from them, as well,” he said. “There are always opportunities to learn, find new and better ways to do things and I think it’s important that we’re listening.”